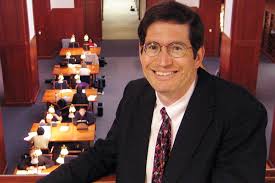 Join us on Tuesday, August 18, at noon for a presentation & conversation with Harvard Law School Professor Michael Klarman on the making of the constitution and its relevance for today's world.  Most Americans revere their Constitution yet know relatively little about its origins.  Prof. Klarman recently published the first comprehensive history of the Constitution’s making, The Framer’s Coup: The Making of the United States Constitution.   From the Philadelphia convention to the fierce debates between Federalists and Antifederalists, and the introduction of the Bill of Rights, Prof. Klarman will speak on how the Framers’ clashing interests shaped the Constitution and American history to the present day.

This is a FREE event, but registration is required (registration link below).  This is a joint event with the Harvard Club of Sarasota. The webinar will be moderated by Club President, Trey Farmer.  After Prof. Klarman's presentation, there will be time for Q&A.  Please email your questions in advance or during the webinar to Trey Farmer at treyfarmer@gmail.com or utilize the Q&A function in Zoom Webinar.  We will take as many questions as time allows.  The webinar will last for approximately one hour.

Professor Michael J. Klarman is the Kirkland & Ellis Professor at Harvard Law School, where he joined the faculty in 2008.  He received his B.A. and M.A. (political theory) from the University of Pennsylvania in 1980, his J.D. from Stanford Law School in 1983, and his D. Phil. in legal history from the University of Oxford (1988), where he was a Marshall Scholar.  After law school, Professor Klarman clerked for the Honorable Ruth Bader Ginsburg on the United States Court of Appeals for the D.C. Circuit (1983-84).  He joined the faculty at the University of Virginia School of Law in 1987 and served there until 2008 as the James Monroe Distinguished Professor of Law and Professor of History. Klarman has also served as the Ralph S. Tyler, Jr., Visiting Professor at Harvard Law School, Distinguished Visiting Lee Professor of Law at the Marshall Wythe School of Law at the College of William & Mary, Visiting Professor at Stanford Law School, and Visiting Professor at Yale Law School. Klarman has won numerous awards for his teaching and scholarship, which are primarily in the areas of Constitutional Law and Constitutional History.  In 2009 he was inducted into the American Academy of Arts & Sciences. Klarman’s first book, From Jim Crow to Civil Rights: The Supreme Court and the Struggle for Racial Equality, was published by Oxford University Press in 2004 and received the 2005 Bancroft Prize in History.  He published two books in 2007, also with Oxford University Press: Brown v. Board of Education and the Civil Rights Movement and Unfinished Business: Racial Equality in American History, which is part of Oxford’s Inalienable Rights series.  In 2012, he published From the Closet to the Altar: Courts, Backlash, and the Struggle for Same-Sex Marriage and in 2016 The Framer’s Coup: The Making of the United States Constitution. Don't miss this exciting webinar with Professor Klarman!